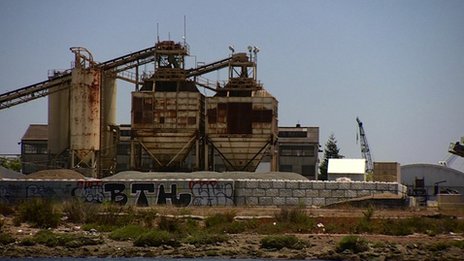 The run down Oakland waterfront has seen a $1.5bn investment from China

Five-year-old Eli is perhaps the face of America’s future.

He looks a little nervous going in front of his 15 fellow pupils in his kindergarten class in a San Francisco school and reading out the children’s duties for the day.

His nerves are understandable. He’s speaking in a difficult, foreign language – Mandarin Chinese.

Behind him, an elegantly drawn poster of the sea, the sun, clouds and a ship, their names spelt out in Chinese characters.

This is Presidio Knolls School, where they practise what they call “total immersion” learning, speaking Chinese from day one.

Here, on the Pacific Ocean, where a third of the population are ethnic Chinese, President Barack Obama’s pivot to Asia seems only natural.

Eli’s mother, Mikhal Bouganim, says: “As an economic and…